Opus DDOS is a double density filing system developed by Opus Supplies Ltd for the BBC Micro, to service public demand for increased disc capacity and to provide a replacement for the scarce and expensive Intel 8271 floppy drive controller (FDC) at the heart of Acorn DFS. Advertised from late 1983 to early 1988, it provides storage for up to 248 files and 355 kilobytes of data on a single sided disc, and up to 992 files and 1422 kilobytes on a fully equipped BBC Micro with two double sided disc drives.

Opus DDOS is fully Acorn DFS compatible, meaning it can read, write and format discs in the Acorn DFS disc format as well as its own.

The native DDOS format is a single sided, double density 40 or 80 track format. (A double sided disc can hold two independent DDOS surfaces.) Each track carries eighteen 256 byte sectors. The drive spins at 300 rpm and talks at 250 kHz bandwidth, just as with DFS, but a switch to MFM encoding means twice as many bits per second (250 000) can be squeezed into that bandwidth. However the larger gaps needed between double density sectors mean that the number of sectors cannot quite be doubled.

The physical format is a variant of the IBM System 34 specification, and so much of the terminology has been carried across. For further and lower-level details please see the Western Digital (WD) floppy drive controller datasheets.

Each sector is given an ID at format time; the parameters of the ID, listed below, are used by the DFS and the floppy disc controller to address sectors.

All these parameters can potentially take any value between 0 and 244, and so confuse Acorn DFS and some non-standard controllers.

The IBM System 34 format specifies five kinds of gap that appear at the beginning and end of each track, between sectors and within sectors, to allow the floppy disc hardware time to settle and prepare. When formatting, DDOS builds a RLE table representing the raw bytes on the track, and inserts gaps according to some of the parameters given in OSWORD &7F. For detailed information on the gaps and their locations, please see the WD FDC datasheets.

In practice the gap parameters can vary within quite a wide range and still appear to work. The *FORMAT command built into DDOS specifies gap1 = &24 and gap 3 = &1B, to write respectively 36 or 27 bytes of &4E before the required synchronising sequence; and gap5 = 0, which eliminates the pre-index gap and the index address mark.

The double density format is based on the Acorn DFS catalogue system and effectively partitions the disc into 8 or fewer DFS-style volumes each holding up to 31 files.

Before a disc can be used reliably by DDOS, it must be formatted and blank catalogues written to the first track. This is done automatically by the *FORMAT utility.

Track 0 contains eight volume catalogues in the first sixteen sectors, and ends with a disc catalogue. The volume catalogues are identical to those of Acorn DFS, albeit with a reinterpretation of sector addressing, and (in EDOS only) an extension of length and start address fields if the volume is large.

The fields are packed in the volume catalogues according to the following diagram: 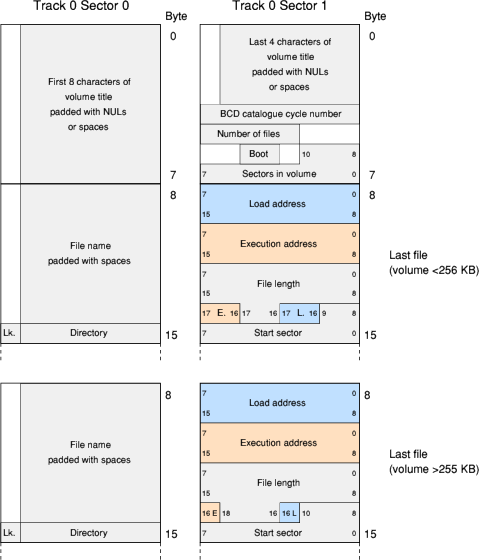 There is room for 31 file entries in the catalogue. Each entry takes up eight bytes in each of the two catalogue sectors. In the descriptions below any multiple of 8 up to 240 can be added to the byte offsets.

Files must be listed in descending order of start sector with no gaps in the catalogue. Empty files should be given a start sector of 0. Files cannot be fragmented but there may be free sectors between files.

If bit 10 of the volume size field is set (that is, if the volume is 256 KB or larger) then these addresses are reduced to 17 bits each, and so an I/O or second processor address is selected solely by bit 16.

In sector 16 is the disc catalogue which assigns tracks of the disc to each volume.

If a volume is absent then its start track is set to 0. On formatting or *VOLGEN the volume sizes are adjusted if necessary so that every track is allocated to a volume.

Byte 0 is set to zero by EDOS 0.4 where it represents the low byte of a 24-bit, little-endian number of bytes on the disc surface. DDOS 3.45, however, places the sector size code %001 in bits 7 to 5 – so that the byte value is &20 – and writes a big-endian number of sectors in bytes 1 and 2; this type (shown on the left) is seen most often. Otherwise there is no functional difference between the catalogues. EDOS does not look at the volume size, computing it instead from the sectors per track and number of tracks fields.

Sector 17 is not used, but EDOS overwrites it during *CATGEN. In this case it is a copy of the freshly initialised sector 15 but for an &01 byte at offset &04.

This is the first board to be pictured in Opus's advertisements, appearing in the August 1984 issue of The Micro User. It carries a 40 pin Intel chip to the north of the header, almost certainly the Intel 8272. 'Opus' is in bold type and reads from south to north.

Based on the Western Digital 2791 controller; PCB designator EO 118. One example was assembled in or after April 1984 and a WD2791 based board was reviewed in A & B Computing in December 1984. The 'Opus.' typeface is the same as used in the ads from November 1983 onwards, being lighter than the font on the 11-chip board and reading from north to south.

An early design (judging by the lettering) of the WD2791 controller board, without a buffer between the controller chip and the data bus. Seen at Chris's Acorns.

A compact design first pictured in May 1985, with the Western Digital 1770 controller placed alongside the header and upside down when fitted. The board had 5 ICs in total.

Opus boards have had a custom memory-mapped layout throughout their history, unlike Watford DDFS boards for example which were redesigned to be compatible with the Acorn interface. The hardware interface of all Western Digital controller based boards is as follows:

The control latch is a write-only register at &FE84, laid out as follows:

The bottom two bits correspond to the DFS drive number, 0..3.

In the case of the WD 2791, all registers except the control latch are inverted; EOR #&FF is needed after reading or before writing.

In December 1983, Opus publicised their first double density DFS in a stop press announcement. The interface hardware was most likely the 11-chip PCB; the Intel 8272 having a similar design to the 8271 would have simplified programming and reduced time to market. A later advertisement priced the kit at £99.95.

In April 1984 a "new" double density interface, apparently the 7-chip WD2791 board, was announced and initially priced at £120.00. In or around this time Opus EDOS 0.4 was probably the accompanying DFS. If so, then over the course of the year the firmware went through three major versions, a change of name and a revised command set until A & B Computing reviewed Opus DDOS version 3.11 in December. The review, and Opus's advertisements, carried pictures of the 11-chip daughterboard though A & B stated the controller IC was a WD2791.

The design lasted until at least February 1985 when a drop in price to £99.95 suggested a new controller had arrived. The 5-chip WD1770 daughterboard was revealed in April, though the 11-chip image still appeared frequently. DDOS 3.45 had provision (in the form of redundant EOR instructions) to target either the WD1770 or WD2791 controller though it was most often installed with a WD1770.

When the Challenger add-on was announced in October that year, the command set was more like EDOS than DDOS. It is likely that Opus reverted to the older, smaller firmware to make room for the RAM disc extensions.

Here is a survey of Opus DDOS advertisements in The Micro User volumes I to III. Advertisements were run every month, this table lists only important changes. Details of the A & B Computing review and the release of Opus's Spectrum products are included.

All versions of Opus DDOS firmware were supplied on a 16 KB ROM. This allowed room for a comprehensive Intel 8271 emulator and some essential utilities that were disc based under Acorn DFS. Version 3.11 was reviewed in A & B Computing in December 1984 and the series culminated on 1 March 1986 with version 3.46, which gave the following help:

The size and number of volumes could be reassigned with a 'quick format' (*VOLGEN) which erased all files and therefore needed a *ENABLE beforehand. Volumes were allocated in units of 4.5 KB which was the size of one track.

Files were named and retrieved in the same syntax as Acorn DFS, except the drive identifier could have a volume letter from A to H as well as, or instead of, the drive number. So a full absolute file specification would look like :2B.$.MENU. A default volume letter could be set with *DRIVE (as with *DIR for the directory), and the default itself defaulted to A. The volume letter was ignored when accessing Acorn DFS discs. The parser was not as precise as the one in Acorn DFS, and did not accept : and . in file names even when the characters were unambiguously part of the leaf name.

A compatible piece of firmware from 1984, running on the 7-chip WD2791 interface board. The command syntax resembles Challenger rather than DDOS, there is no *TAPEDISC facility and the ROM does away with the full screen displays of DDOS. PAGE is slightly lower than normal at &1700.

EDOS maintains a default filename: if a filename passed to EDOS for resolution has an empty leaf name, EDOS substitutes the previous leaf name passed to it. The default drive, volume and directory, however, come from the most recent arguments to *DRIVE, *VOL and/or *DIR. The combined default filename is displayed in the *CAT catalogue header. SAVE "", for example, overwrites this file, which is not necessarily the file most recently accessed; *INFO displays details of the default file.

Leaf names consisting of one to seven spaces (thus non-empty) are valid and equivalent. As always, EDOS pads a leaf name with spaces to seven characters to store it in its workspaces and the catalogue. While such a name is the last one mentioned, $., F. etc. and the empty string refer to files whose leaf names are all spaces. This state persists until a leaf name containing non-space characters is accessed.

On hard reset the default filename is initialised to :0A.$.  [sic].

The firmware is stable (at version 0.4) and assembled in modules, but lacks some aspects of Acorn DFS behaviour which can cause some compatibility problems. Uses slightly less memory than either DDOS or Acorn DFS. Nothing is known about where this fits into Opus's product timeline or indeed whether it is a genuine Opus release. A third-party patch has since been produced.

Applications that handle the DDOS format