Difference between revisions of "VDU 23"

Defines a character or performs various miscellaneous VDU functions. Unrecognised or unimplemented commands are passed to VDUV, on platforms where VDUV is implemented. 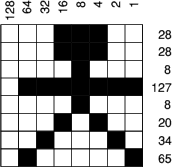 In this type of command, all nine parameters are used.

The first parameter selects the character to be defined, and the other eight encode an 8×8 monochrome bitmap that OSWRCH will print for that character in future (through VDUCHR).

For example, the stick figure character printed in the User Guide (and above) can be defined with the following sequence:

When the character is printed, such as by

the figure will typically appear in white on a black background, that is, in the negative compared to the image above.

Depending on the font explode state a number of other characters will simultaneously be assigned that bitmap. The font is not ordinarily transferred to the printer.

In MODE 7 the user defined character has no effect on the Teletext hardware, but the definition is stored for later use. In the bitmapped MODEs the new definition does not change the appearance of copies of that character already on screen; OSBYTE &87 will no longer recognise them as that character.

In this command, VDU 23 programs the 6845 register <register> (or emulated register) with value <value>. For the functions of each register, see CRTC.

Platforms without a hardware 6845 CRTC, such as RISC OS and BBC BASIC for Windows, partly emulate the CRTC so that cursor appearance and screen interlace can be controlled with VDU 23. The statement VDU 23;8202;0;0;0; which appears in many BBC Micro programs, also turns the cursor off in RISC OS, as it expands to VDU 23,0,10,32;0;0;0.

Note that this command can 'unprogram' the current MODE so that a full DRAM refresh is no longer performed. This coupled with a tight machine code loop erases most of the I/O processor's memory, with disastrous results.

Some BASIC programs contain embedded VDU 23 sequences in REM statements to protect themselves against being LISTed; for instance, Ducksoft's Tom Pinone Poker.

This subcommand turns the cursor on or off. The defined values of <state> are:

Note that the cursor will re-appear if cursor editing is used.

This defines Extended Colour Fill patterns (ECFs) 1 to 4. They are selectable for plotting with GCOL 16*ECF,0.

As the fill patterns are mapped to the pixel layout of each screen mode, they are defined differently for different colour depths. On RISC OS, ECF patterns can be defined in BBC/Master compatible mode or in RISC OS native mode. To change between the modes, VDU 23,17,4 is used.

Numbering the pixels of each row as 76543210 give the following arrangement:

This command will scroll the whole screen, or the current text window, in any direction.

When scrolling by a byte horizontally, the movement depends on the colour depth of the current mode:

Note that the cursor is never moved.

Note that 'left', 'up', etc are dependent on the direction of cursor movement as defined with VDU 23,16.

Values of <t1> and <t2> other than those listed produce undefined results.

No clearing will occur if the end point is before the start point.

This command resets all the Extended Colour Fill (ECF) patterns to the default for the current screen mode.

Defines Extended Colour Fill (ECF) patterns 1 to 4 in a simpler manner than VDU 23,2-5. The ECF is defined as a repeated block of four lines of two repeated pixels.

This allows the direction the cursor moves after a character is printed to be specified. Normal cursor movement is to the right, and then wrapping off the edge of the screen or window and then downwards. VDU 23,16 changes these directions, and all other commands that move or set the position of the text cursor.

The new direction is specified with (old status AND mask) EOR setting, and the new status is interpreted as follows:

Sets the additional tint for the specified colour. COLOUR and GCOL can only specify 6-bit logical colours, so in 256-colour screen modes, VDU 23,17 is used to set the lowest two bits of the colour.

This allows the character size and spacing of text printed in VDU 5 mode (text at graphics cursor) to be changed. If bit 1 of flags is set, the text size is changed, if bit 2 is set, the spacing is changed. xsize and ysize are specified in pixels.

This command sets the width in pixels of lines drawn with PLOT commands.

This command sets the physical colour range to use when anti-aliasing between the two specified logical colours.

This command sets the physical colour range to use when anti-aliasing between the background and the specified logical foreground colour in 256-colour screen modes.

This selects the name font at the specified size for future use when selecting font fontnumber. The font name is sent as a CR-terminated sequence immediately after the VDU 23 sequence.

This command performs various sprite operations, depending on the value of m.

If m=0, then sprite n is selected to be plotted by subsequent PLOT &EC+k commands.

If m=1, then the rectangular area between the last two graphics points is uses to define sprite n.

Reserved for user calls. These are defined to vector through VDUV, and will never be used for inbuilt functions.